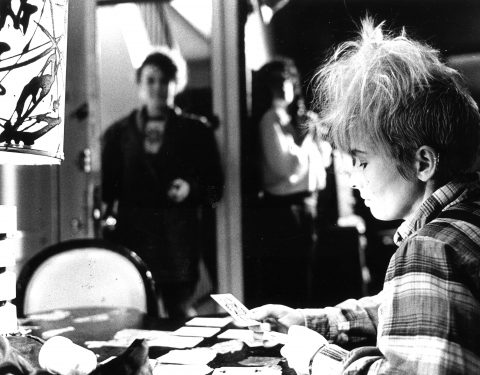 White Homeland Commando takes the familiar terrain of network action drama and tilts the playing field. Reminiscent of today’s popular reality-based cop shows, White Homeland Commando offers a straightforward story: four members of a special police unit investigate and infiltrate a New York-based white supremacist organization. But that is where the commonplace ends. The teleplay is shot and edited in a highly textured visual style, the colors are subdued yet somehow garish, and the sound is deliberately just out of sync with the speaker’s lips. Occasional static combines with jumps in the plot — the editing is reminiscent of a television viewer flipping channels.

This is the Wooster Group’s first work conceived solely for video. Although fictional, the teleplay relies on a composite of actual accounts of hate crimes, culled from such diverse sources as the Anti-Defamation League of B’nai B’rith’s Bulletin, assorted literature from white supremacist groups, and the news media. Shot on location in Brooklyn, Queens, Manhattan and New Jersey, the eight interrelated sections depart from the conventional television police story by offering no easy answers. The Wooster Group has achieved an imaginative and intimate commentary on the rise of hate crimes, Klan-based electoral activity and white supremacist attitudes in this country. White Homeland Commando reveals that the reality of our troubled, violent society is as inescapable as the news headlines.
—Electronic Arts Intermix